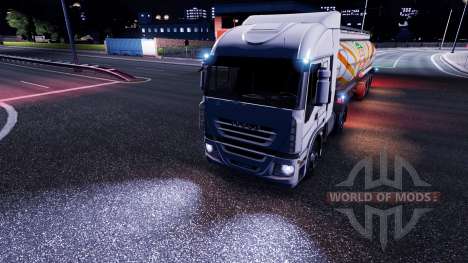 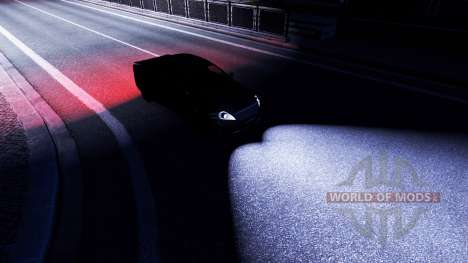 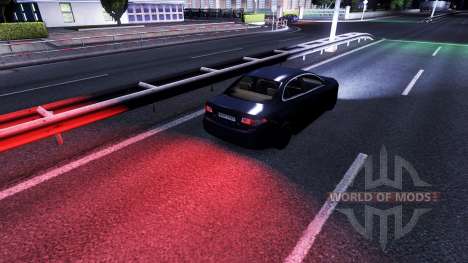 Light mod for Euro Truck Simulator 2. The modification brings the light of all cars in the game with out the real dynamic. That is the road and objects covered now not by layering textures and a real source of light began to Shine all the lights and lights on all the cars and the traffic too.

Cons: the light on the "chandelier" and the Bullbar shaking (bad to the cab bolted devices, and the cab in ETS-2 was mobile), with a view from behind the steering wheel, at night, coming from behind the traffic lights salon - the hike from the car (if you open it in the pain) there is no rear exterior wall, or just in the game shadows can be cast only by a specially drawn objects. Well, the main jamb light on my GT 440, at night, in the city, with lots of traffic going wild FPS drop from 60 to 20 frames. But I think on average and powerful computers should all beam to work.

Pros: now light the traffic was more or less on realistic similar cars plausible illuminate the road and not as ghosts ride. By the way, the traffic shines the same light as the middle of the tractor on which the rule itself, and all sorts of light bulbs dimensions-Stopera too, such as tractors. Now can any light any lamps and lights change-adjust as most like, and according to the capacity of your computer, it can be done for a couple of minutes, without any photoshopow, do not unzip the archive, a simple Notepad.

The structure of the files in the custom folder need to "disable" texture light. The files in the folder hookup is configs almost all of the light bulbs, there on the name you can understand what .sii is responsible for what.

Modification is also compatible with the version of the game 1.14.0.4 s.